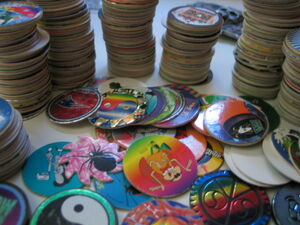 POGs Wiki is your Wikia Database on POGs! We are editing over 18 articles! At Pogs Wiki we give you all kinds of info on the one and only things that you flip as if they're coins! POGs are collect-ables caps that have little images on them and were made of TWO whole Series'! Tottaly, there are up to 120 POGs between Series 1 and 2! Don't forget, POGs are comin' back so, get your pack online or at the Nearest 99 cents store!
Did you know that POGs were first ever played in 1940.

How to Play POGs!

Each player has to put in the same amount of POG.

Use the slammer to slam the POGs.

Keep the POGs that flip over.

The player who ends up with the most Pogs wins!

(You can also play POG and give back the POGs).

Lots and Lots of pages on this Wikia are Stubs and don't have Images :( but, YOU can fix this by editing our Wiki!

Community content is available under CC-BY-SA unless otherwise noted.
Advertisement